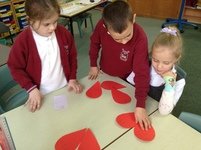 This week, Year Two have been tackling some big issues in RE, considering how the world was created! They have compared the Christian and Hindu versions of the creation stories and made some insightful comparisons between the two. Working well in groups, they created a lotus flower that depicted the Hindu creation story. Some extremely animated and articulate conversations took place!

© 2020 Driffield Church Of England Voluntary Controlled Infant School.
school website, mobile app and podcasts are created using School Jotter, a Webanywhere product. [Administer Site]
We use cookies to provide you with the best experience on our website. Read our Privacy Policy to find out more.